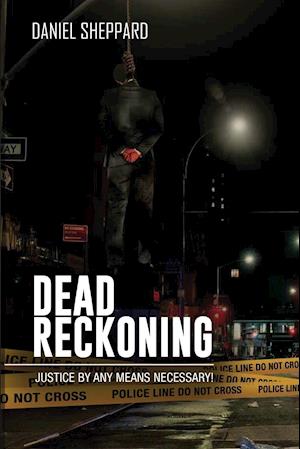 Dead Reckoning: Justice by Any Means Necessary! Synopsis! His murder surprised and shocked everyone who knew him. On September 9, 1989 at approximately three in the morning, Jeffrey (Big Jeff) Fisher a twenty-six-year-old crack dealer who stood 6 ft 3 inches and weighed well over three hundred pounds was shot inside a top floor Harlem brownstone kitchenette apartment, although his body was found in the building basement the police theorized that after he was shot inside the top floor apartment Fisher either fell or was thrown out the window and landed in the basement where he expired from his many wounds. Homicide detectives from the 28th squad further speculated that since another unidentified male black whose machinegun riddled body was found inside the top floor apartment that possibly Fisher was not the unknown assailants main target that he was possibly at the wrong place at the wrong time and ended up as collateral damage. This theory however did not quite square with what Fisher's mother knew of her son's gruesome death. She knew who had put the murder contract on her son's life and why. Bernice Fisher Green was a lovely stylish fifty-year old woman, highly capable of discerning her own facts, and what she knew, about the killings of her son, the real story will shake the village of Harlem and quite possibly the entire city of New York and points beyond. But she is going to have to tread carefully here. Powerful forces are at work and lives are on the line including her own. The world in which Bernice Duncan, Fisher, Green grew to womanhood in is the city behind the city-the old time Harlem street hustlers, numbers runners, dope dealers, gangsters, white and black clinging to their last vestiges of power, the hidden players who control the street games like puppet masters pulling strings. Enter into the world of the cunning, fabulously wealthy Butch Cassidy, the self -styled Don of Harlem who the FBI dubbed the Phantom because of his ability to slip through the arms of the law for close to two decades while he remained at the top of a very large drug organization, with ties to Mexican drug cartels and shadowy government agents who fly metric tons of cocaine into the US, landing at a secret base high up in the Ouachita Mountains in Arkansas. Butch Cassidy distributes the tons of cocaine he receives shipped via tractor trailers from agents of the secret government alphabet agency that delivers the drugs to the parking garage he owned located in the industrial section of the Bronx. Butch Cassidy's drug crews operate along the entire Atlantic seaboard from Boston to Alabama and all points in between. Protected for the most part by corrupt cops in the cities they're operating in. The drug crew's operations rake in millions of dollars a year. Meet James (Big Jim) Hart, a former NYPD Lieutenant with twenty years on the NYPD; Hart was bounced from the job, convicted of corruption, and extortion then sentenced to prison for a short stretch. After his release from prison Big Jim went to work for the Cassidy organization as a fixer, calling in old markers from city politicians, greasing NYPD palms, reaching out to corrupt cops in whichever city the drug crews are operating in. Big Jim is a degenerate horse player he could always be found every afternoon at the racetrack with a fist full of hundred-dollar betting slips. Meet the fearsome hitman and extortionist Clarence (Preacher) Heatley, known throughout the Harlem underworld as the Black Hand of Death. Preacher is a homicidal psychopath who will do anything however gruesome for a quick buck, his murderous drug/extortion crew is named the Family. if you were a member of this nefarious group you had to make your bones (kill someone) and you had to be an earner: which meant robbing killing and extorting drug dealers.