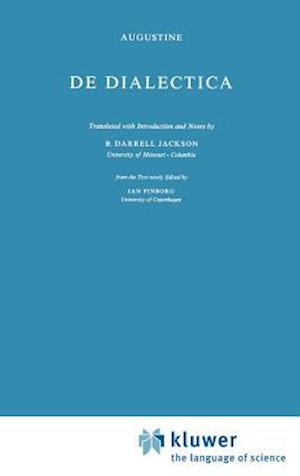 I first became interested in De dialectica in 1966, while I was doing re search on Augustine's knowledge of logic. At the time I made a transla tion of the Maurist text and included it as an appendix to my doctoral dissertation (Yale, 1967). In 1971 I thoroughly revised the translation on the basis of the critical text of Wilhelm Crecelius (1857) and I have re cently revised it again to conform to Professor Jan Pinborg's new edition. The only previously published translation of the whole of De dialectica . is N. H. Barreau's French translation in the Oeuvres completes de Saint Augustin (1873). Thomas Stanley translated parts of Chapters Six and Nine into English as part of the account of Stoic logic in his History of Philosophy (Pt. VIII, 1656). I offer De dialectica in English in the hope that it will be of some interest to historians of logic and of the liberal arts tradition and to students of the thought of Augustine. In translating I have for the most part been as literal as is consistent with English usage. Although inclusion of the Latin text might have justified a freer translation, for example, the use of modern technical terms, it seemed better to stay close to the Latin. One of the . values in studying a work such as De dialectica is to see familiar topics discussed in a terminology not so familiar. In the translation I follow these conventions.