indgår i serie A Nation Divided: Studies in the Civil War Era 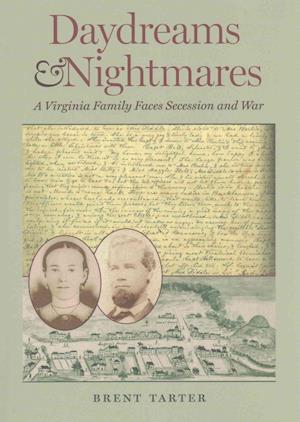 The decision of the eventual Confederate states to secede from the Union set in motion perhaps the most dramatic chapter in American history, and one that has typically been told on a grand scale. In Daydreams and Nightmares, however, historian Brent Tarter shares the story of one Virginia family who found themselves in the middle of the secession debate and saw their world torn apart as the states chose sides and went to war.

George Berlin was elected to serve as a delegate to the Virginia Convention of 1861 as an opponent of secession, but he ultimately changed his vote. Later, when defending his decision in a speech in his hometown of Buckhannon, Upshur County, he had to flee for his safety as Union soldiers arrived. Berlin and his wife, Susan Holt Berlin, were separated for extended periods--both during the convention and, later, during the early years of the Civil War. The letters they exchanged tell a harrowing story of uncertainty and bring to life for the modern reader an extended family that encompassed both Confederate and Union sympathizers.

This is in part a love story. It is also a story about ordinary people caught up in extraordinary events. Although unique in its vividly evoked details, the Berlins' story is representative of the drama endured by millions of Americans. Composed during the nightmare of civil war, the Berlins' remarkably articulate letters express the dreams of reunion and a secure future felt throughout the entire, severed nation. In this intimate, evocative, and often heartbreaking family story, we see up close the personal costs of our larger national history.

A Nation Divided: Studies in the Civil War