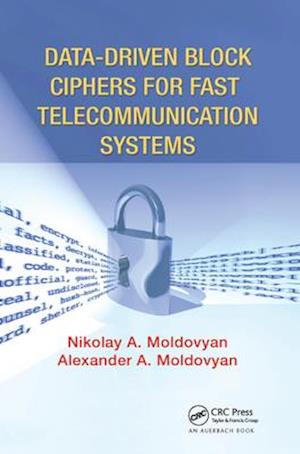 The Most Progressive and Complete Guide to DDO-Based Ciphers Developers have long recognized that ciphers based on Permutation Networks (PNs) and Controlled Substitution-Permutation Networks (CSPNs) allow for the implementation of a variety of Data Driven Operations (DDOs). These DDOs can provide fast encryption without incurring excessive hardware costs in modern telecommunication networks. However, until now, with a few exceptions, most DDO-based ciphers have been poorly represented in available literature and have continued to remain known to only a small number of encryption experts. In Data-Driven Block Ciphers for Fast Telecommunication Systems, Nikolai Moldovyan and Alexander Moldovyan, major innovators and holders of several dozen international patents in encryption technology, provide the background and detail the applications needed to investigate new properties of PNs especially relevant to the improvement of modern wireless systems.Furthermore, they propose a universal architecture involving controlled bit permutation instruction that will permit the performance of both data-driven permutations and an arbitrary prescribed fixed permutation in a single cycle. Immediately improved efficiency for current and future fast telecommunication systems and mobile networks Because of its simplicity and efficient use of current hardware, the embedding of this architecture is a highly attractive option for CPU manufacturers.By detailing all the relevant information into a single volume for the first time, the authors of this book make that option more feasible than ever before.