- Readers and Texts, from the Fourteenth Century to the Present 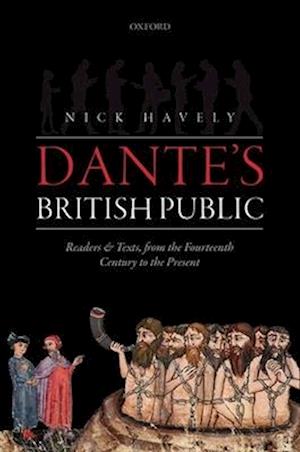 This is the first account of Dante's reception in English to address full chronological span of that process. Individual authors and periods have been studied before, but Dante's British Public takes a wider and longer view, using a selection of vivid and detailed case studies to record and place in context some of the wider conversations about and appropriations of Dante that developed in Britain across more than six centuries, as access to his workextended and diversified. Much of the evidence is based on previously unpublished material in (for example) letters, journals, annotations and inventories and is drawn from archives in the UK and across the world, from Milan to Mumbai and from Berlin to Cape Town. Throughout, the role of Anglo-Italian cultural contacts and intermediaries in shaping the public understanding of Dante in Britain is given prominence - from clerics and merchants around Chaucer's time, through itinerant scholars, collectors and tourists in the early modern period, to the exiles and expatriates of the nineteenth and twentieth centuries. The final chapter brings the story up to the present, showing how the poet's work has been seen (from the fourteenth century onwards) asaccessible to 'the many', and demonstrating some of the means by which Dante has reached a yet wider British public over the past century, particularly through translation, illustration, and various forms of performance.

Forfattere
Bibliotekernes beskrivelse Dante's British Public examines the many and various ways in which the work of the leading poet of medieval Europe has been acquired, represented, and discussed by British readers over the last six centuries. 25 black-and-white halftones