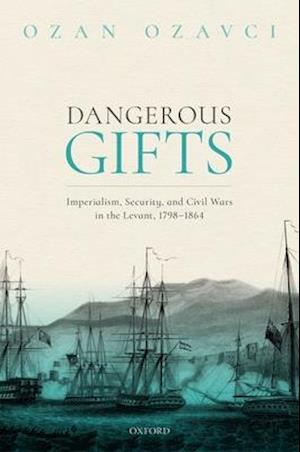 From Napoleon Bonaparte's invasion of Egypt in 1798 to the foreign interventions in the ongoing civil wars in Syria, Yemen, and Libya today, global empires or the so-called Great Powers have long assumed the responsibility to bring security in the Middle East. The past two centuries have witnessed their numerous military occupations to 'liberate', 'secure' and 'educate' local populations. They staged first 'humanitarian' interventions in history and establishedhitherto unseen international and local security institutions. Consulting fresh primary sources collected from some thirty archives in the Middle East, Russia, the United States, and Western Europe, Dangerous Gifts revisits the late eighteenth and nineteenth century origins of these imperial securitypractices. It explicates how it all began. Why did Great Power interventions in the Ottoman Levant tend to result in further turmoil and civil wars? Why has the region been embroiled in a paradox-an ever-increasing demand despite the increasing supply of security-ever since? It embeds this highly pertinent genealogical history into an innovative and captivating narrative around the Eastern Question, emancipating the latter from the monopoly of Great Power politics, and foregrounding theexperience of the Levantine actors. It explores the gradual yet still forceful opening up of the latter's economies to global free trade, the asymmetrical implementation of international law in their perspective, and the secondary importance attached to their threat perceptions in a world where politicaland economic decisions were ultimately made through the filter of global imperial interests.

Forfattere
Bibliotekernes beskrivelse Dangerous Gifts is a book about the strategic, economic, legal, and religious undertones of Great Power interventions and violence in the Levant.