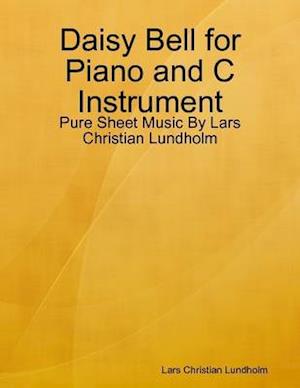 Also known as Henry Decker it was composed in 1892 by English composer Harry Dacre while in the United States. This song quickly became a hit in London on the Music Hall scene and was first performed by Katie Lawrence whilst Tony Pastor was the first to sing it in the USA. It has been featured in film and TV in 2001: A Space Odyssey, Marvel's Agents of S.H.I.E.L.D. and The Theory of Everything. And it has been recorded by among others Nat King Cole, Alvin and the Chipmunks and BlurSheet Music for C Instrument accompanied by Piano arranged by Lars Christian Lundholm. Daisy Bell is also known by alternative title: A Bicycle Built for Two, Daisy Daisy. - Instrumentation: Piano and C Instrument- Level: Medium- Score Type: Score and 1 Part- Tempo: Medium- Genre: Music Hall- Composer: Harry Dacre- Year Composed: 1892- Pages (approximate): 11