- Social Change in the Archaic of the Valley of Oaxaca 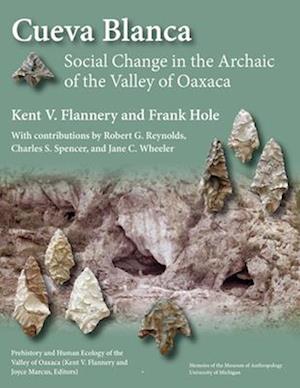 Cueva Blanca lies in a volcanic tuff cliff some 4 km northwest of Mitla, Oaxaca, Mexico. It is one of a series of Archaic sites excavated by Kent Flannery and Frank Hole as part of a project on the prehistory and human ecology of the Valley of Oaxaca. The oldest stratigraphic level in Cueva Blanca yielded Late Pleistocene fauna, including some species no longer present in southern Mexico. The second oldest level, Zone E, produced Early Archaic material with calibrated dates as old as 11,000-10,000 BC . Zones D and C provided a rich Late Archaic assemblage whose closest ties are with the Abejas phase of Puebla's Tehuac n Valley (fourth millennium BC). Spatial analyses undertaken on the Archaic living floors include (1) the drawing of density contours for tools and animal bones; (2) a search for Archaic tool kits using rank-order and cluster analysis; and (3) an attempt to define Binfordian "drop zones" using an approach drawn from computer vision.