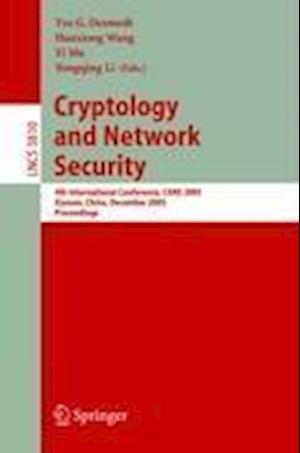 The 4th International Conference on Cryptology and Network Security (CANS 2005) was held in Xiamen, Fujian Province, China, December 14-16, 2005. The conference was sponsored by the Fujian Normal University and Fujian Digital Certi?cate Authority Co. Ltd and was organized in cooperation with the Int- national Association for Cryptologic Research (IACR). The ?rst International Workshop on Cryptology and Network Security was in Taipei, Taiwan, 2001. The second one was in San Francisco, California, USA, September 26-28, 2002, and the third in Miami, Florida, USA, September 24-26, 2003. CANS 2005 was the ?rst CANS with proceedings published in the Lecture Notes in Computer Science series by Springer. The Program Committee received 118 submissions, and accepted 28 papers from which 1 withdrew and thus 27 papers were included in the proceedings. The reviewing process took eight weeks, each paper was carefully evaluated by at least three members from the Program Committee. We appreciate the hard work of the members of the ProgramCommittee and external referees who gave manyhoursoftheir valuabletime.Thanksto CarlEllison,GoceJakimoski,Bart Preneel, Yongge Wang, Christopher Wolf and Shouhuai Xu, who acted as the shepherds of 6 papers included in the proceedings.In addition to the contributed papers, there were two invited talks: Wenbo Mao spoke on "Research Issues in Network Security" - a practical viewpoint; and Matt Franklin on "Research Issues in Network Security" - a foundations viewpoint.