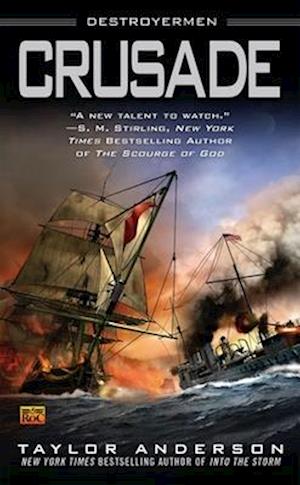 New York Times bestselling author Taylor Anderson's phenomenal series of alternate history continues as the crew of the USS Walker battle old enemies in a new world. After being swept from the World War II Pacific into an alternate world, Lieutenant Commander Matthew Patrick Reddy and the crew of the USS Walker have allied with the peaceful Lemurians in their struggle against the warlike, reptilian Grik. But they are sorely outnumbered, and even the power of the Walker cannot turn the tide of battle. Then, Reddy finds Mahan--the other destroyer that passed through the rift. Together, the ships will teach the Lemurians to stand and fight. Or so they think. For there is another vessel at large: the Amagi--the massive Japanese battleship that Walker was fleeing back in the Pacific. The Amagi also came through the rift... And the Amagi is in the hands of their enemies.

Forfattere
Bibliotekernes beskrivelse Swept from the Pacific of World War II into an alternate world, Lieutenant Commander Matthew Reddy and the crew of the U.S.S. "Walker" have allied with the Lemurians--a mammalian race threatened by the warlike reptilian Grik. But their greatest threat is yet to come.