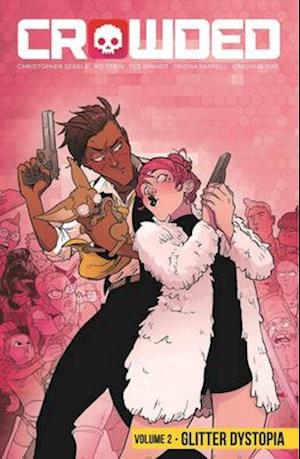 Eleven minutes into the future, Charlie Ellison is the subject of a million dollar crowdfunded REAPR campaign on her head. Low-rated DFEND bodyguard Vita is keeping her safe for 30 days from a desperate population looking to get rich quick with a gun and a dream. After escaping a big, televised attempt on their lives and the Reapr campaign blowing past two million bucks, Charlie and Vita abandon Los Angeles for the utopian desert paradise of Las Vegas in search of who started the Reapr campaign and how to shut it down. In the process, the human debris of Charlie's past and the well-kept secrets of Vita's old life will come spilling out too. As tensions rise and the attempted murderers keep coming, the only thing more unlikely than Charlie and Vita surviving their Reapr killers is them surviving each other. Collecting the second arc of the critically-acclaimed ongoing series by Eisner-nominated writer CHRISTOPHER SEBELA (SHANGHAI RED, HIGH CRIMES, WE(L)COME BACK), RO STEIN & TED BRANDT (CAPTAIN MARVEL: RAVEN THE PIRATE PRINCESS), TRIONA FARRELL (RUNAWAYS, MECH CADET YU) and CARDINAL RAE (BINGO LOVE, ROSE). Collects CROWDED 7-12