- An Appraisal of Their Strictures on Progress and Poverty (v. 1)

indgår i serie Studies in Economic Reform and Social Justice 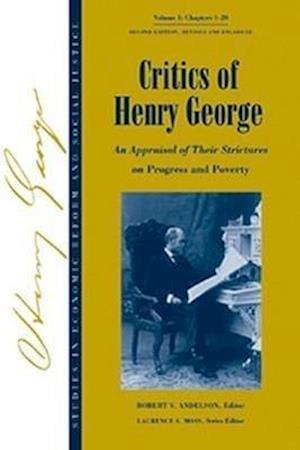 Since its publication in 1979, Critics of Henry George has achieved an international reputation as by far the most comprehensive review and analysis of the objections leveled against Henry George's American classic, Progress and Poverty. George's 19th century classic argument for land reform produced an army of critics including Alfred Marshall, J. B. Clark, F. A. Walker and in the 20th century, Edwin Cannan, Murray Rothbard and Mark Blaug. In recent years Georgist insights have been gaining ground in economics on a variety of fronts especially in the areas of the economics of location and public finance. Now, more than a century after George and 25 years after the first edition of the Critics of Henry George, the Critics has been expanded, revised and enlarged by Dr. Robert Andelson. The Andelson revision will include a revised last chapter evaluating Georgism as it was interpreted by its critics.