indgår i serie Midland Books No 1 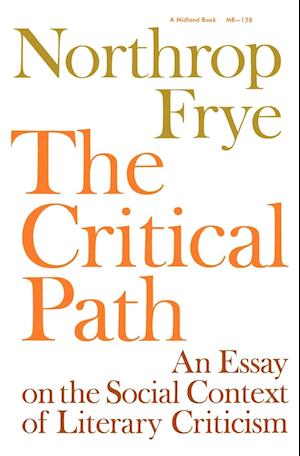 This philosophic inquiry into fundamental problems of literature and society is an immensely important addition to the canon of one of America's most original and distinguished critics. What is the function of poetry? Of criticism? In what sense does the poet "know"? What is the relationship between a society and its art? Northrop Frye conducts us on an illuminating survey of these and other broad philosophic issues and offers many incidental insights into specific cultural phenomena as well. Such matters as Marxist aesthetics, Renaissance humanism, the relation of poetry to religion, the idea of progress, and the challenge of our contemporary youth culture are among the dozen interesting topics that engage his attention along the way.Mr. Frye identifies two predominating ideologies in Western culture which he designates as the "myth of concern" and the "myth of freedom." A fully developed myth of concern, he writes, "compromises everything that it most concerns a society to know." Its purpose is to hold society together, hence its deeply conservative character. The "myth of freedom," on the other hand, embodies the "liberal" attitudes of objectivity and respect for the individual. The author traces the relative importance of these two myths from Homeric Greece to the present, relating them to the types of art and government they foster, the roles of the poet and critic, and many other topics. The final thesis of the two myths: "To maintain a free and mature society we have to become aware of the tension between concern and freedom, and the necessity of preserving them both."In relating literature to this dialect, Mr. Frye ranges through the entire history of Western philosophy and literature-from Plato to Heidegger, from Sir Philip Sydney to Bob Dylan-showing us that his inquiring mind has once again gone beyond the field of literature, narrowly conceived, into the wider region of the history of ideas. He regards the artist and critic in generous terms-as persons not insulated from society but involved in it in the most profound sense and so provides a unique study informed by intelligence, broad learning, and grace and precision of style.