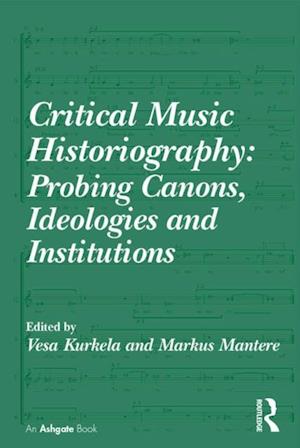 During the past two decades, there has emerged a growing need to reconsider the objects, axioms and perspectives of writing music history. A certain suspicion towards Francois Lyotard's grand narratives, as a sign of what he diagnosed as our 'postmodern condition', has become more or less an established and unquestioned point of departure among historians. This suspicion, at its most extreme, has led to a radical conclusion of the 'end of history' in the work of postmodern scholars such as Jean Baudrillard and Francis Fukuyama. The contributors to Critical Music Historiography take a step back and argue that the radical view of the 'impossibility of history', as well as the unavoidable ideology of any history, are counter-productive points of departure for historical scholarship. It is argued that metanarratives in history are still possible and welcome, even if their limitations are acknowledged. Foucault, Lyotard and others should be taken into account but systematized viewpoints and methods for a more critical and multi-faceted re-evaluation of the past through research are needed. As to the metanarratives of music history, they must avoid the pitfalls of evolutionism, hagiography, and teleology, all hallmarks of traditional historiography. In this volume the contributors put these methods and principles into practice. The chapters tackle under-researched and non-conventional domains of music history as well as rethinking older historiographical concepts such as orientalism and nationalism, and consequently introduce new concepts such as occidentalism and transnationalism. The volume is a challenging collection of work that stakes out a unique territory for itself among the growing body of work on critical music history.