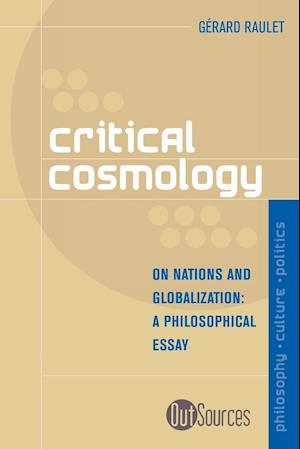 Globalization is more than an economic or geopolitical matter; it is above all a new (political) culture. Like the Kantian revolution in the 18th century, our 'global' moment urgently requires philosophical inquiry to determine if it represents a 20th century revolution in thinking. Critical Cosmology takes up the task of establishing the much needed philosophical tools to 'think' globalization by reading Kant's re-foundation of cosmopolitanism as a political, not moral, text. Raulet, in committing himself to a close study of this late capitalist global moment, gets us to a much-needed cosmology of 21st century 'globalization.' The world's economic evolution has continually challenged some of our most basic modern concepts, especially the recognition of the rights of nations. This evolution has also created a need for recognizing the rights of citizens and others participating in the growth of the world's economies. In neither the service of a prescriptive morality nor in the service of any one specific cultural, political, or intellectual ideology GZrard Raulet investigates the construction of a public space that can accommodate global citizenship. Through a unique and massive genealogy of political thinkers Raulet, like no other contemporary critic, begins the process of carving out the social, cultural, and political space that will come to accommodate the common activity of an emerging global culture. A brilliant and unique investigation of our contemporary political moment this will affect political thinkers of every variety and, especially, those who are concerned with conflict and peace studies, the development of nations and nation-states, and human rights on a national and international scale