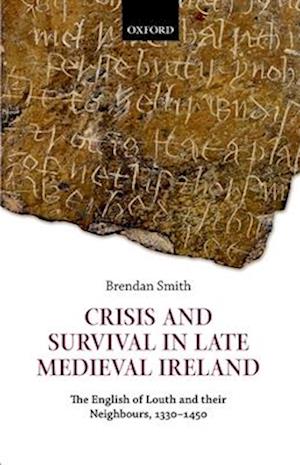 Medieval Ireland is associated in the public imagination with the ruined castles and monasteries that remain prominent in the Irish landscape. Crisis and Survival in Late Medieval Ireland: The English of Louth and their Neighbours, 1330-1450 examines how the society that produced these monuments developed over the course of a turbulent century, focussing particularly on county Louth, situated on the coast north of Dublin and adjacent to the earldom ofUlster. Louth was one of the areas that had been most densely colonised by English settlers in the decades around 1200, and ties with England and loyalty to the English crown remained strong. Its settlers found it possible to maintain close economic and political ties with England in part because of their proximityto the significant trading port of Drogheda, and the residence among them of the archbishop of Armagh, primate of Ireland, also extended their international horizons and contacts.In this volume, Brendan Smith explores the ways in which the English settlers in Louth maintained their English identity in the face of plague and warfare. The Black Death of 1348-9, and recurrent visitations of plague thereafter, reduced their numbers significantly and encouraged the Irish lordships on their borders to challenge their local supremacy. How to counter the threat from the MacMahons, O'Neills, and others, absorbed their energies and resources. It not only involved mounting armedcampaigns, taking hostages, and building defences; it also meant intermarrying with these families and entering into numerous solemn, if short-lived, treaties with them. Smith draws on original source material, to present a picture of the English settlers in Louth, and to show how living in theborderlands of the English world coloured every aspect of settler life.

Forfattere
Bibliotekernes beskrivelse This volume explores the ways in which the English settlers in Louth maintained their English identity in the face of plague and warfare, through the turbulent decades between 1330 and 1450. 6 maps, 4 tables