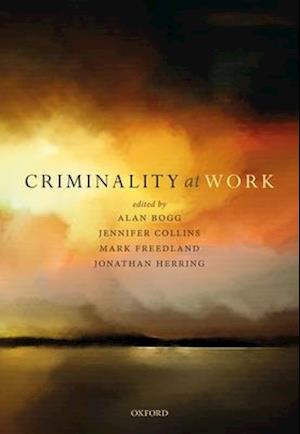 From the Master and Servant legislation to the Factories Acts of the 19th century, the criminal law has always had a vital yet normatively complex role in the regulation of work relations. Even in its earliest forms, it operated both as a tool to repress collective organizations and enforce labour discipline, while policing the worst excesses of industrial capitalism. Recently, governments have begun to rediscover criminal law as a regulatory tool in a diverse set ofareas related to labour law: 'modern slavery', penalizing irregular migrants, licensing regimes for labour market intermediaries, wage theft, supporting the enforcement of general labour standards, new forms of hybrid preventive orders, harassment at work, and industrial protest. This volume explores the political and regulatory dimensions of the new 'criminality at work' from a wide range of disciplinary perspectives, including labour law, immigration law, and health and safety regulations. The volume provides an overview of the regulatory terrain of 'criminality at work', exploring whether these different regulatory interventions represent politically legitimate uses of the criminal law. The book also examines whether these recent interventions constitute a newpattern of criminalization that operates in preventive mode and is based upon character and risk-based forms of culpability. The volume concludes by reflecting upon the general themes of 'criminality at work' comparatively, from Australian, Canadian, and US perspectives. Criminality at Work is a timely, rich and ambitious piece of scholarship that examines the many intersections between criminal law and work relations from a historical and contemporary vantage-point.

Forfattere
Bibliotekernes beskrivelse Edited by four leading law scholars, this volume explores the political and regulatory dimensions of modern 'criminality at work' from a wide range of disciplinary perspectives.