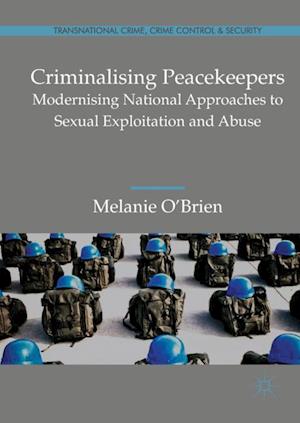 This book examines Australia's and the United States' ability to prosecute their peacekeepers for sexual exploitation and abuse. The United Nations has too long been plagued by sexual exploitation and abuse in some of the world's most vulnerable communities. Discussion within United Nations' reporting and academic scholarship focuses on policy; however, a significant concern outlined here is that peacekeepers are committing sexual offences with impunity, despite exclusive criminal jurisdiction over peacekeepers being granted to their sending states. In this original study O'Brien provides an in-depth, feminist analysis of US and Australian sexual offending law and jurisdiction over their military and military-civilian peacekeepers. Based on timely critical analysis, this book demonstrates the limitations states face in ensuring accountability for sexual exploitation and abuse by peacekeepers - a factor which directly contributes to ongoing commission of and impunity for such offences. Calling for a rights-based, transnational law response to these crimes, this engaging and thought-provoking work will appeal to international practitioners, governments, UN policy-makers, and scholars of international, military and criminal law.