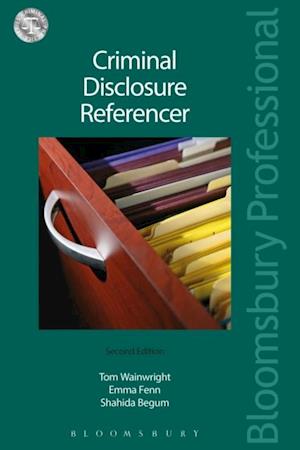 Disclosure remains the most important part of trial preparation and can often make the difference between conviction and acquittal. The process can only work and produce fair results if all parties to the process are aware of their duties. The second edition of Criminal Disclosure Referencer (first edition: The Disclosure Referencer) provides practitioners with a practical, user-friendly guide to the law and guidance relating to the disclosure of unused material. The text follows the disclosure process chronologically from the commencement of the investigation to the conclusion of the case drawing together all the relevant legislation, codes, guidelines, rules, protocols and case law in a comprehensive manner, thereby enabling the reader to see quickly and effectively the duties and obligations of the main participants. Since the last edition of this work, the criminal justice landscape has changed fundamentally. The number of pre-trial hearings have been drastically reduced and replaced with a single 'Plea and Trial Preparation Hearing'. The principles of 'Better Case Management' have been introduced, requiring advocates to take more responsibility in relation to disclosure. In the vast majority of Crown Court cases evidence and disclosure are now provided digitally. All of these changes require parties to the criminal justice system to be fully up to date with their obligations in relation to disclosure.The second edition is updated to take account of numerous developments in legislation, case law and procedure including:Attorney General's Guidelines on Disclosure (updated October 2013)Judicial Protocol on the Disclosure of Unused Material in Criminal Cases (updated December 2013) Magistrates' Court Disclosure Review (June 2014)Revisions to the Criminal Procedure and Investigations Act Codes of Practice as a result of the Magistrates' Court Disclosure Review Criminal Procedure Rules 2015 (incorporating digital case changeover)New codes of practice relating to Regulation of Investigatory Powers Act 2000 (December 2014)The Covert Surveillance and Property Interference code of practice and the Covert Human Intelligence Source' code of practice (December 2014)The Interception of Communications code of practice (January 2016) Criminal Procedure (Amendment) Rules 2016R. (on the application of Yam) v Central Criminal Court [2015] UKSC 76 - Whether there was a power under the common law, or under the Admin of Justice Act 1960 s12 to prevent an individual from placing certain material before the ECtHR. If so, whether the power could be exercised where the domestic court was satisfied that it was not in the interests of the State for the material to be made public even to the ECtHRR v Asiedu (Manfo Kwaku) [2015] EWCA Crim 714R v Salt (Daryl) [2015] EWCA Crim 662R v Boardman (David) [2015] EWCA Crim 175 - Courts approach to failures in disclosure by Prosecution.R v R and others [2015] EWCA Crim 1941 - The Court of Appeal provided guidance on disclosure where large quantities of electronic documents are involved and on rulings as to abuse of process where delay has been caused by disclosure.R. (on the application of Nunn) v Chief Constable of Suffolk [2014] UKSC 37 - Hugely significant case on the Crown's duty of disclosure post-conviction.