indgår i serie Frontiers Of Accounting And Financial History 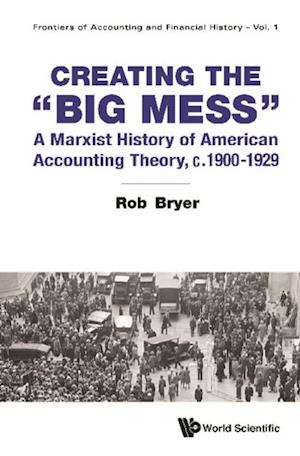 Creating the 'Big Mess' and its sequel Accounting for Crises use Marx's theory of capitalism to explain why there is no generally accepted theory of financial accounting, and explore the consequences, by studying the history of American accounting theory from c.1900 to 2007. The answer, Creating the 'Big Mess', is first that while late-19th century British accounting principles, founded on the going-concern concept, provided an objective basis for holding management accountable to shareholders for its stewardship of capital, and were accepted by the nascent American profession, they are inchoate. Second, Irving Fisher's economic theory of accounting, based on the assertion that present value is the accountants' measurement ideal, which is subjective, framed early-20th century American accounting theory, which undermined British principles, making them incoherent. In an unregulated, pro-business environment, leading theorists, particularly Henry Rand Hatfield and William A. Paton, Jr., became authorities for management discretion, creating the 'big mess' Hatfield saw in late-1920s American accounting. Accounting for Crises examines the roles of Fisher's theory in promoting the speculation leading to the 1929 Great Crash, aggravating the Great Depression, hindering accounting regulation from the 1930s, producing the Financial Accounting Standard Board's conceptual framework, and facilitating the 2007-2008 Global Financial Crisis.