- Contemporary Wood Sculptures from the Puuc Region of Yucatan, Mexico 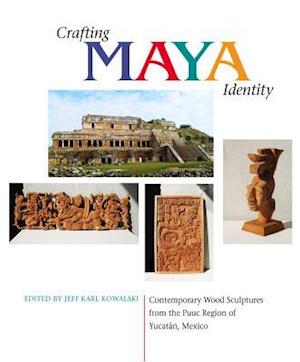 Published for the exhibition at the Jack Olson Gallery, School of Art, Northern Illinois University, curated by Jeff Karl Kowalski and Mary Katherine Scott Based on ancient Maya imagery and sold to visitors to archaeological sites, the technically refined, finely detailed, and visually complex carvings created by the artisans of the Puuc region are often described as handicraft or \u201ctourist art.\u201d These works, however, provide important information on how a relatively recent artistic tradition has emerged in and responded to particular historical and economic contexts. The influx of \u201ccultural tourists\u201d to archaeological sites in the Puuc region has provided the impetus for a group of entrepreneurial local artisans to combine opportunities for economic gain with creative expression. The carvings also communicate significant messages about the ambivalent nature of Maya cultural identity. Although tourism tends to reinforce ideas that the most authentic image of Maya culture resides in the Pre-Columbian past, the monetary incentive it provides has supported these artisansAE efforts to reclaim and re-task such cultural imagery. Accompanying essays by art historians and anthropologists-Kowalski, Janet Catherine Berlo, Christopher B. Steiner, Quetzil Casta\u00f1eda, and Mary Katherine Scott- provide individualized studies of Native American, African, and Mesoamerican aesthetic artifacts. The authors examine issues that lie at the intersection of art, visual culture, cultural identities, authenticity, and globalization. A key focus includes how identity is constructed, represented, and understood both by the artisans and tourist visitors in the context of cross-cultural contact, mass media, and touristic promotion. The volume considers the broader role of artists and the visual arts in society and the study of such art forms in the context of changing conceptions of art and aesthetics. Crafting Maya Identity presents the first comprehensive examination of the distinctive artworks produced by these Yucatec Maya carvers. The book will appeal to anthropologists, art historians, and scholars of Maya studies and cross-cultural aesthetics, as well as artists and collectors. Included is an abridged Spanish version of the introductory text and a foreword by Alfredo Barrera Rubio, former Director of the Regional Center of Yucat\u00e1n of the Mexican National Institute of Anthropology and History.

Forfattere
Bibliotekernes beskrivelse Considers the broader role of artists and the visual arts in society and the study of such art forms in the context of changing conceptions of art and aesthetics. This book presents an examination of the distinctive artworks produced by the Yucatec Maya carvers. It is suitable for anthropologists, art historians, and scholars of Maya studies.