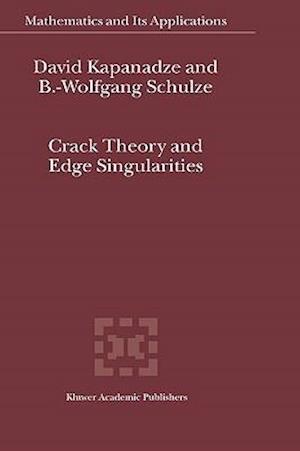 Boundary value problems for partial differential equations playa crucial role in many areas of physics and the applied sciences. Interesting phenomena are often connected with geometric singularities, for instance, in mechanics. Elliptic operators in corresponding models are then sin gular or degenerate in a typical way. The necessary structures for constructing solutions belong to a particularly beautiful and ambitious part of the analysis. Cracks in a medium are described by hypersurfaces with a boundary. Config urations of that kind belong to the category of spaces (manifolds) with geometric singularities, here with edges. In recent years the analysis on such (in general, stratified) spaces has become a mathematical structure theory with many deep relations with geometry, topology, and mathematical physics. Key words in this connection are operator algebras, index theory, quantisation, and asymptotic analysis. Motivated by Lame's system with two-sided boundary conditions on a crack we ask the structure of solutions in weighted edge Sobolov spaces and subspaces with discrete and continuous asymptotics. Answers are given for elliptic sys tems in general. We construct parametrices of corresponding edge boundary value problems and obtain elliptic regularity in the respective scales of weighted spaces. The original elliptic operators as well as their parametrices belong to a block matrix algebra of pseudo-differential edge problems with boundary and edge conditions, satisfying analogues of the Shapiro-Lopatinskij condition from standard boundary value problems. Operators are controlled by a hierarchy of principal symbols with interior, boundary, and edge components.