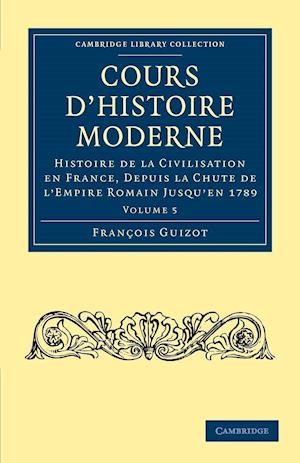 French politician Francois-Pierre-Guillaume Guizot (1787-1874) is well-known for establishing 'Guizot's law', which implemented primary education for all French citizens. As well as occupying various political offices during some of the most turbulent years in his nation's political history, Guizot was also an historian and was appointed to the chair of modern history at the Sorbonne in 1812. First published between 1829 and 1832, this five-volume history of 'civilisation in France' is based on a series of lectures delivered in 1828. The books are described as covering the period from the end of the Roman Empire to 1789, but the main focus is on the medieval period, to the death of St Louis (1270). Volume 5 concludes the series, discussing France during the reigns of Philippe-Auguste and St Louis, but looking ahead to the rise of the Third Estate.

Forfattere
Bibliotekernes beskrivelse Published between 1829 and 1832, this five-volume history of 'civilisation in France' from the end of the Roman Empire to 1789 focuses on the medieval period. Volume 5 concludes the series with the history of the monarchy after St Louis, and the rise of the Third Estate. Worked examples or Exercises