County Borough Elections in England and Wales, 1919-1938: A Comparative Analysis 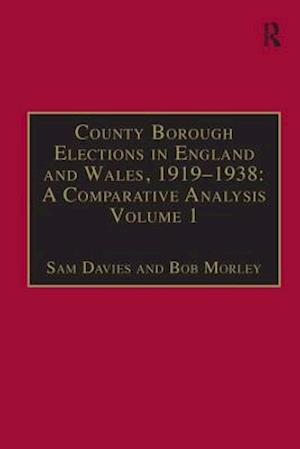 These volumes provide an essential comprehensive work of reference for the annual municipal elections that took place each November in the 83 County Boroughs of England and Wales between 1919 and 1938. They also provide an extensive and detailed analysis of municipal politics in the same period, both in terms of the individual boroughs and of aggregate patterns of political behaviour. Being annual, these local election results give the clearest and most authoritative record of how political opinion changed between general elections, especially useful for research into the longer gaps such as 1924-29 and 1935-45, or crisis periods such as 1929-31. They also illuminate the impact of fringe parties such as the Communist Party and the British Union of Fascists, and also such questions as the role of women in politics, the significance of religious and ethnic differentiation and the connection between occupational and class divisions and party allegiance. Analysis at the ward level is particularly useful for socio-spatial studies. A major work of reference, County Borough Elections in England and Wales, 1919-1938 is indispensable for university libraries and local and national record offices. Each volume has approximately 700 pages.