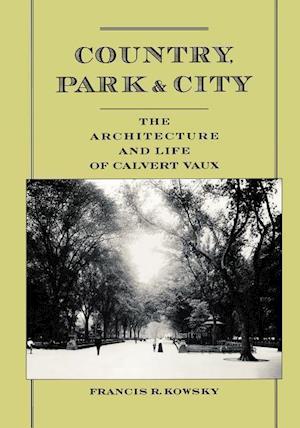 After beginning his career as an architect in London, Calvert Vaux (1824-1895) came to the Hudson River valley in 1850 at the invitation of Andrew Jackson Downing, the reform-minded writer on houses and gardens. As Downing's partner, and after Downing's death in 1852, Vaux designed country and suburban dwellings that were remarkable for their well-conceived plans and their sensitive rapport with nature. By 1857, the year he published his book Villas and Cottages, Vaux had moved to New York City. There he asked Frederick Law Olmsted to join him in preparing a design for Central Park. He spent the next 38 years defending and refining their vision of Central Park as a work of art. After the Civil War, he and Olmsted led the nascent American park movement with their designs for parks and parkways in Brooklyn, Buffalo, and many other American cities. Apart from undertakings with Olmsted, Vaux cultivated a distinguished architectural practice. Among his clients were the artist Frederic Church, whose dream house, Olana, he helped create; and the reform politician Samuel Tilden, whose residence on New York's Gramercy Park remains one of the country's outstanding Victorian buildings. A pioneering advocate for apartment houses in American cities, Vaux designed buildings that mirrored the advance of urbanization in America, including early modelhousing for the poor. He planned the original portions of the Metropolitan Museum of Art and the American Museum of Natural History and conceived a stunning proposal for a vast iron and glass building to house the Centennial Exhibition in Philadelphia. Especially notable are the many bridges andother charming structures that he designed for Central Park. Vaux considered the Park's Terrace, decorated by J. W. Mould, as his greatest achievement. An active participant in the cultural and intellectual life of New York, Vaux was an idealist who regarded himself as an artist and a professional. And while much has been written on Olmsted, comparatively little has been published about Vaux. The first in-depth account of Vaux's career, Country, Park, and City should be of great interest to historians of art, architecture, and urbanism, as well as preservationists and other readers interested in New York City's past and America'sfirst parks.