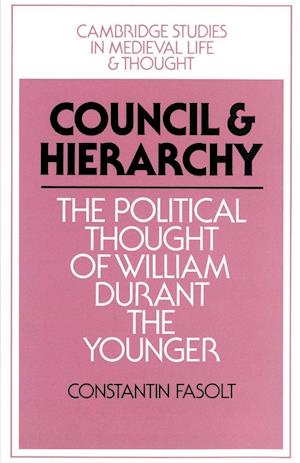 In 1311, at the council of Vienne, William Durant the Younger (c. 1266-1330), the French bishop and count, demanded that general councils ought to meet every ten years in order to place effective limits on the papal plenitude of power because 'what touches all must be approved by all'. This is the first systematic interpretation of William Durant's remarkable project to transfer supreme legislative authority from the papacy to general councils. It suggests that the conciliar theory has a more ambivalent complexion than is sometimes recognized. It confirms, on the one hand, that constitutional ideas were deeply embedded in the tradition of the church, which enabled Durant to anticipate the council of Constance by more than a hundred years. On the other hand, Durant attributed an authority to ancient law that overrode his republican ideas, sapped their vitality, and launched him on a pursuit of the true meaning of the law that could end only in his transformation into an historian and a reluctant champion of monarchy. William Durant the Younger's ideas thus help us to understand both the origins of the conciliar theory and the transition from late medieval reform movements to early modern humanism and princely sovereignty.