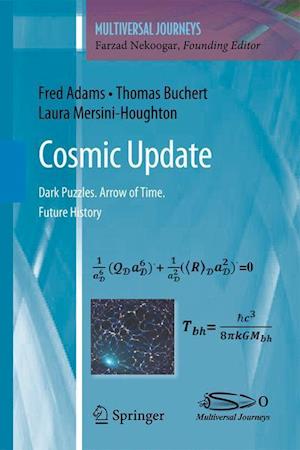 "...The Multiversal book series is equally unique, providing book-length extensions of the lectures with enough additional depth for those who truly want to explore these fields, while also providing the kind of clarity that is appropriate for interested lay people to grasp the general principles involved." - Lawrence M. KraussCosmic Update Covers:A novel approach to uncover the dark faces of the Standard Model of cosmology.The possibility that Dark Energy and Dark Matter are manifestations of the inhomogeneous geometry of our Universe.On the history of cosmological model building and the general architecture of cosmological modes.Illustrations on the Large Scale Structure of the Universe.A new perspective on the classical static Einstein Cosmos.Global properties of World Models including their Topology.The Arrow of Time in a Universe with a Positive Cosmological Constant.Exploring the consequences of a fundamental Cosmological Constant for our Universe. Exploring why the current observed acceleration of the Universe may not be its final destiny.Demonstrating that nature forbids the existence of a pure Cosmological Constant.Our current understanding of the long term (in time scales that greatly exceed the current age of the Universe) future of the Universe.The long term fate and eventual destruction of the astrophysical objects that populate the universe -- including clusters, galaxies, stars, planets, and black holes. The material is presented in a layperson-friendly language followed by addition technical sections that explain the basic equations and principles. This feature is very attractive to readers who want to learn more about the theories involved beyond the basic description. "Multiversal Journeys (TM) is a trademark of Farzad Nekoogar and Multiversal Journeys, a 501 (c) (3) nonprofit organization."