The Correspondence of Jeremy Bentham

indgår i serie The Collected Works of Jeremy Bentham 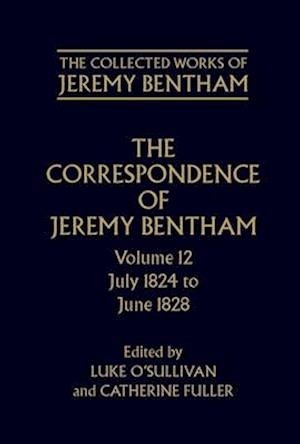 This twelfth volume of Correspondence contains authoritative and fully annotated texts of all known letters sent both to and from Bentham between July 1824 and June 1828. The 301 letters, most of which have never before been published, have been collected from archives, public and private, in Britain, the United States of America, Switzerland, France, Japan, and elsewhere, as well as from the major collections of Bentham Papers at University College London Libraryand the British Library.In mid-1824 Bentham was still preoccupied with the Greek struggle for independence against Turkey, though his active involvement waned as he became disenchanted with the behaviour of the deputies sent to London by the Greek National Assembly. His international reputation was reflected in his continuing contact with Simon Bolivar and Bernardino Rivadavia in South America, and with John Quincy Adams, John Neal, Henry Wheaton, and others in the United States, and his forging of newcontacts in Guatemala, India, and Egypt. In the autumn of 1825 he visited France, where he stayed with Jean Baptiste Say and La Fayette, and was feted by the French liberals.Bentham made considerable progress drafting material for his pannomion, or complete code of laws, and in particular for his Constitutional and Procedure Codes, while John Stuart Mill edited the massive Rationale of Judicial Evidence. Bentham became increasingly active in the cause of law reform, and exchanged a series of letters on the subject with Robert Peel, the Home Secretary, and Henry Brougham. He maintained his friendships with John and Sarah Austin, George and Harriet Grote, James andJohn Stuart Mill, John Bowring, Joseph Hume, Francis Burdett, Francis Place, and Joseph Parkes, re-established contact with the third Marquis of Lansdowne, son of his old friend the first Marquis, and made new acquaintances in James Humphreys, Sutton Sharpe, and Albany Fonblanque.

Forfattere
Bibliotekernes beskrivelse Jeremy Bentham, philosopher and reformer, was at the height of his fame and influence in the 1820s. This volume presents 301 letters which contain correspondence with leaders such as Simon Bolivar and Bernardino Rivadavia, British statesmen such as Robert Peel and Henry Brougham, and intellectuals such as John Stuart Mill and Sarah Austin. 1 frontispiece