- Pulpit Preaching and the Church of England Missionary Societies, 1760-1870 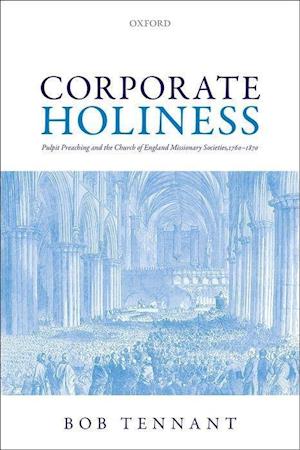 Bob Tennant presents a history of the missionary work, cultures, and rhetoric of the Church of England in 1760-1870, when it was the predominant organizer of Protestant overseas missions. Through close attention to the Society for Promoting Christian Knowledge (SPCK, founded 1699), the Society for the Propagation of the Gospel in Foreign Parts (SPG, 1701), and the Church Missionary Society (CMS, 1799) Tennant offers a systematic exploration of the complexrelationship between the Societies' policies, decision-making systems, and administration, as recorded in their unpublished minute books, and the rhetorical and theological activity of their sermon literature. Thus their 'corporate holiness' is shown to be a synthesis of theology, ministry, rhetoric,administration, and methods of building public support. In the process, Tennant also offers analyses of controversies within the Church of England about questions such as the relationship of Bible to liturgy, the nature and techniques of mass education, charitable behaviour, and the processes of decision-making. Supported by statistical evidence, he offers a revisionist account of the Church's relationship to the American Revolution, the Romantic movement, and the Indian 'Mutiny'. Besidesoffering a critical history of his subject, Tennant also suggests a methodology for approaching a general thesis of Christian missionary societies on their own terms, theoretically separable from and avoiding the distortions and imbalances which have been imposed by the secularist imperial historiographyto which they have so often been subordinated.

Forfattere
Bibliotekernes beskrivelse Corporate Holiness puts literary criticism and archival research to the service of an account of the Church of England missions to the overseas territories in the period 1760-1870. It describes how pulpit rhetoric sustained a dialogue that enabled the development of the three main Anglican missionary societies.