- Citizen Singapore: How to Build a Nation

indgår i serie Giants of Asia 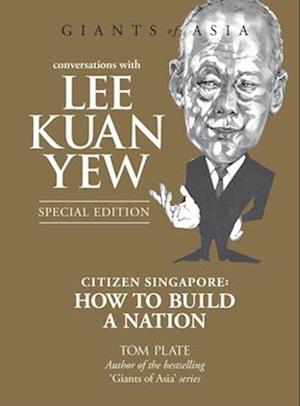 Lee Kuan Yew was no one's fool and handled know-it-all Western journalists well when he cared to deal with them at all.

Forfattere
Bibliotekernes beskrivelse Lee Kuan Yew was anything but a coaster, giving it all he had until the very end. And when his long and exceptional life came to its natural end in March 2015, at 91, the outpouring of respect was worldwide. This man, whatever his faults, had been a giant of his time. Over a few decades, he led the grand parade to build modern Singapore and in the process practically redefined quality government for all to see. His views on global geopolitics were universally regarded as benchmark savvy. But what was this often private and guarded 'Giant of Asia' truly like?Drawing on interviews with LKY in the 1990s and 2000s - as well as two afternoons of conversations in 2009 - author, journalist and professor Tom Plate pieces together the driven personality and relentless pragmatism of one of the most outstanding leaders of the last half of the 20th century."You have done a superb job of capturing the many facets of this extraordinary man..." - Dr Henry A. Kissinger on Conversations with Lee Kuan Yew