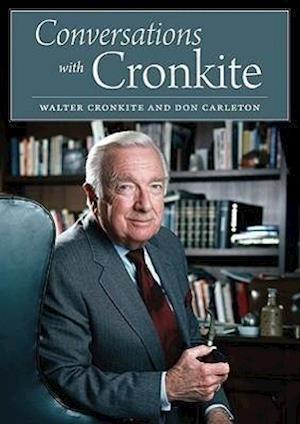 Intimate. Revealing. Candid. Published by the Dolph Briscoe Center for American History, Conversations with Cronkite gives readers a rare glimpse into the life and times of Walter Cronkite in his own words. The book contains selections from interviews between the legendary journalist and an experienced oral historian--Cronkite's friend, Dr. Don Carleton.With the publication of Conversations with Cronkite, readers have the opportunity to discover the behind-the-scenes stories of his life, edited by Carleton to focus on key events, issues, and themes. More than just oral history transcripts, these are the intimate conversations of two friends, covering virtually every aspect of Cronkite's life and career. Illustrated with photographs and archival treasures from the Cronkite Papers, Conversations with Cronkite gives readers the opportunity to once again hear the voice of "the most trusted man in America."Walter Cronkite on:His famous sign off "And that's the way it is"I didn't clear it with [CBS] in any way. I started using it, and [Richard Salant] said, "This presupposes that everything we said is right, that that's the whole picture of the day's news. I don't really think you ought to be doing that." I think he was correct. But the thing had already caught on. It really was just rolling. So I got to kind of a point of being stubborn about it and said, "Well, I like it." [Salant] said, "Well, it's up to you." He let it go. It has been much criticized by serious television critics . . . because of that argument that . . . it was presumptive that everything we said is correct. Which was wrong. I shouldn't have said that. . . . And particularly when we got into controversial subjects like the Vietnam War. In fact, there's a New Yorker cartoon with a guy coming half out of his chair and shouting at his television, saying, "That's NOT the way it is."Being a United Press reporter during the Battle of the Bulge in World War IIGod, it was cold. We looked like Washington's army at Valley Forge. At one point, the troops I was with entered a town, and we got into a fire fight right away. It was very intense. My driver and I hopped out of our jeep and got in behind a doorway. The Germans were at one end of the main street and . . . it was a pretty good fire fight. I looked up and saw a GI . . . leaning out taking a shot or two. . . . I knew this was a story. I yelled out, "What's your name, soldier?" "Colonel Jones." I said, "Where are you from, what outfit are you with?" He said, "Mr. Cronkite, I'm your driver."On Fidel CastroHe was fascinated about . . . my war experience. Fascinated about the landings in Normandy. A real war buff. At one point I said, "I've been in a lot of Communist countries, including living two years in Moscow. I have yet to see a Communist country that understood the necessity of maintenance of . . . buildings or anything else." [Castro] threw up his hands and said, "Oh, boy, I know that. It's absolutely terrible." I said, "Well, why is it?" [Castro] said, "First of all, it's inherent in the idea of Communism. People don't own things, so they don't take care of them. That's the answer you capitalists give, but it's true."