Controversies Over the Imitation of Cicero in the Renaissance 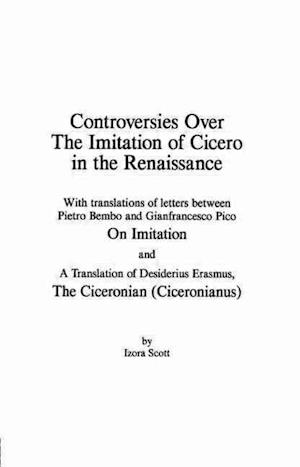 Though the term Ciceronianism could be applied to Cicero's influence and teaching in the field of politics, philosophy, or rhetoric, it is limited in the present study to the technical department of rhetoric. In addition, it represents the trend of literary opinion in regard to accepting Cicero as a model for imitation in composition. The history of Ciceronianism, thus interpreted, has been written with more or less emphasis upon the controversial aspect of the subject in various languages. This work is particularly valuable because the author presents not only her clear analysis of the issues involved, but also translations of key texts by major Renaissance humanists who were involved in the controversy. These include a set of letters between the Italians Pietro Bembo and Gianfrancesco Pico della Mirandola and, more importantly, "The Ciceronian" of the Dutch humanist Desiderius Erasmus. The issues were complex. At one end of the spectrum were the "ultra Ciceronians," mainly Italian, who believed that no Latin word or syntactical structure should be used that was not in Cicero's works. At the other end of the spectrum were those who felt that a number of authors -- Cicero included -- were worthy of emulation. It was not however a mere quibbling about literary style, since the debate came to involve charges of paganism versus Christianity, and challenged the basic concept of humanism developed first in Italy and then in France during the 15th and 16th centuries. The work falls into three divisions: * an introductory chapter on the influence of Cicero from his own time to that of Poggio and Valla when men of letters began a series of controversial writings on the merits of Cicero as a model of style, * a series of chapters treating of these controversies, and * a study of the connection between the entire movement and the history of education.