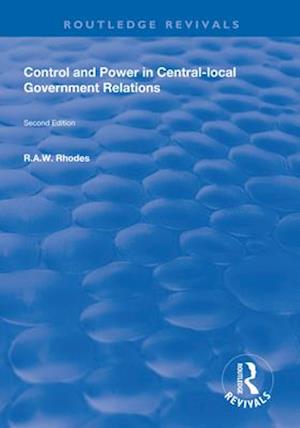 Published in 1999. Originally published in 1981, Control and Power in Central-Local Government Relations set out to provide a re-interpretation of central-local relations in Britain. The book reviewed the (then) existing literature; redefined the subject of intergovernmental relations (IGR); and developed a theory linking IGR to broader issues in the study of British Government. It rapidly became a classic in the study of local government. The link to broader issues what achieved through the power-dependence model and the focus on policy communities. The book underpinned the vast growth in the study of policy networks in British government.This revised edition includes four new chapters, two of which have been specially written. The new Preface traces the fortunes of the power-dependence model, commenting on and updating the individual chapters. A new part II continues the story. It contains a 1986 essay reviewing criticism of the original model (chapter 6); a 1992 article discussing unresolved issues in the study of policy networks (chapter 7); and a new chapter assessing where we are now in the study of networks. It argues, provocatively, for an ethnographic focus on traditions and narratives; on how individuals construct networks. The book remains essential reading for all students and academics concerned with the study of IGR and policy networks.