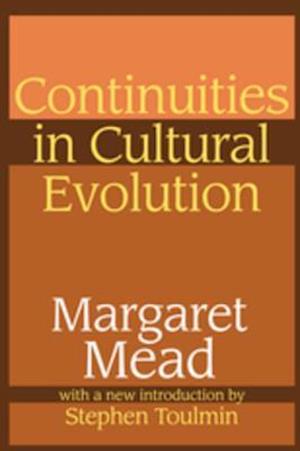 Margaret Mead once said, 'I have spent most of my life studying the lives of other peoples--faraway peoples--so that Americans might better understand themselves.' Continuities in Cultural Evolution is evidence of this devotion. All of Mead's efforts were intended to help others learn about themselves and work toward a more humane and socially responsible society. Scientist, writer, explorer, and teacher, Mead brought the serious work of anthropology into the public consciousness. This volume began as the Terry Lectures, given at Yale in 1957 and was not published until 1964, after extensive reworking. The time she spent on revision is evidence of the importance Mead attached to the subject: the need to develop a truly evolutionary vision of human culture and society. This was desirable in her eyes both in order to reinforce the historical dimension in our ideas about human culture, and to preserve the relevance of historical and cultural diversity to social, economic, and political action. Given the present state of academic and public discourse alike, this volume speaks to us in a language we badly need to recover.