- The Language and Ethics of Self-Harm 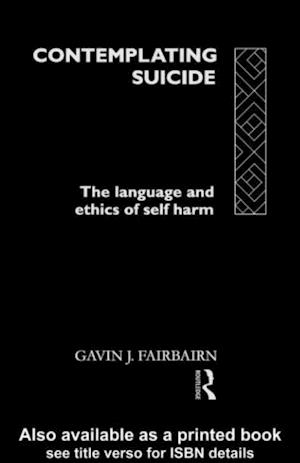 Suicide is devastating. It is an assault on our ideas of what living is about. In Contemplating Suicide Gavin Fairbairn takes fresh look at suicidal self harm. His view is distinctive in not emphasising external facts: the presence or absence of a corpse, along with evidence that the person who has become a corpse, intended to do so. It emphasises the intentions that the person had in acting, rather than the consequences that follow from those actions. Much of the book is devoted to an attempt to construct a natural history of suicidal self harm and to examine some of the ethical issues that it raises. Fairbairn sets his philosophical reflections against a background of practical experience in the caring professions and uses a storytelling approach in offering a critique of the current language of self harm along with some new ways of thinking. Among other things he offers cogent reasons for abandoning the mindless use of terms such as attempted suicide and parasuicide , and introduces a number of new terms including cosmic roulette , which he uses to describe a family of human acts in which people gamble with their lives. By elaborating a richer model of suicidal self harm than most philosophers and most practitioners of caring professions currently inhabit, Fairbairn has contributed to the development of understanding in this area. Among other things a richer model and vocabulary may reduce the likelihood that those who come into contact with suicidal self harm, will believe that familiarity with the physical facts of the matter - the actions of the suicider and the presence or absence of a corpse - is always sufficient to justify a definite conclusion about the nature of the self harming act.