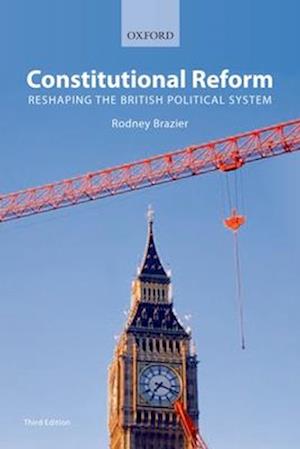 The third edition of Constitutional Reform examines central government, Parliament, and the judiciary in Britain and proposes an agenda for reform. In addition to issues such as voting reform, reform of House of Lords and how citizens' rights might be better protected, the book considers the best methods through which such changes should be achieved and provides material for the international comparison of constitutions. Whilst the book has been fullyrevised and updated to provide a retrospective analysis of the major constitutional reforms of Tony Blair's premiership, it is not limited to that government's agenda and includes material on previous government's reforms and Gordon Brown's reform agenda.The third edition includes two new chapters, one on the structure and possible future of the United Kingdom and the other on whether the United Kingdom should adopt a codified constitution. It retains the clarity and lucid writing style of previous editions and features an expanded bibliography enabling readers to follow up points of particular interest. The book provides detailed coverage of British constitutional reform in the early twenty-first century and whilst aimed primarily at studentsof constitutional law, politics and government, it will also be of interest to the general reader.

Forfattere
Bibliotekernes beskrivelse This book examines the current debate around constitutional reform. Topics covered include the ways in which reform is brought about, the voting system, reform of the House of Lords and reducing Ministers' powers. The third edition features new chapters on 'Union, Dissolution or Federation?' and 'Codifying the Constitution'.