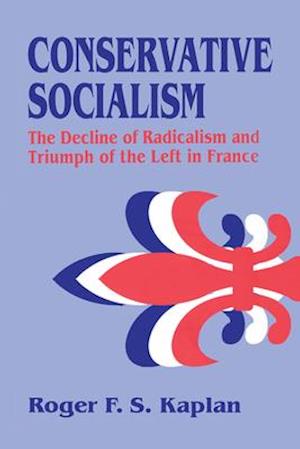 This work on the decline of French radicalism was conceived after the fall of the Berlin Wall as an essay on the decline and decay of the revolutionary idea in European politics. The theme provided an organizing principle for Roger Kaplan's analysis of the evolution of the French left in the wake of events for which it was politically and intellectually unprepared. Kaplan provides a basis for understanding the performance of a French socialist regime in power, one more uncertain of its mission than at any other time in its history. The paradox of French radicalism is that when it was out of office, it was quite certain about its mission. When it attained power, it lost its sense of mission, and hence its confidence as to the proper uses of power."Conservative Socialism" for Kaplan is not simply an invention of the Mitterand Era, but an ideology rooted in French history. Unwilling or unable to embrace the social democratic idea of the "third way," French socialism became a force to conserve particularism in French culture and nationalism in its foreign policies. While socialism had long become a force to inhibit the rise of capitalism and freedom in France, the decline of its radicalism was inevitable. This is because in a country as conservative as France it was necessary for socialists and their assorted allies, to project a conservative image to be trusted. In France, the Left has abandoned the idea of radicalism so as to exercise power.Kaplan's unique and imaginative reading of French political history will have a profound effect on how that nation is perceived in this new epoch of the European Union. He argues persuasively and fairly that the French Left is alive if not well. The Left rose to power in France despite its policy failures, embarrassments, because it transcended the "end" to which its political dogma would have consigned it. Conservative Socialism will have a stunning impact on how political theorists view political developments in France and Europe.