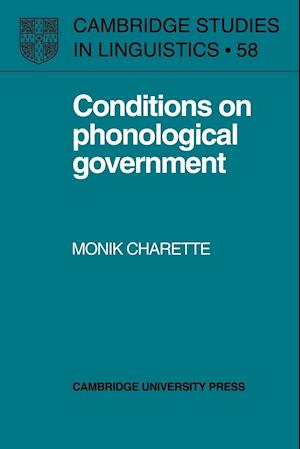 This 1991 book was the first extended study written within the framework of Government Phonology. Following the presentation of the main aspects of this theory, the process of vowel-zero alternations is addressed and analysed together with the idea that phonological processes are determined by principles of Universal Grammar along with parameters that distinguish languages. By using predominantly the alternation between schwa and zero in French, Monik Charette demonstrates that vowel-zero alternations are neither cases of insertion nor of deletion. Rather, they involve the interpretation of 'empty nuclei', i.e. nuclei with no segmental content, which must be licensed by proper government. It is when proper government fails to apply that a vowel is realized. Dr Charette also gives consideration to the constraints to which proper government is subject. She argues that these constraints result from phonological principles in conflict. This book represents a major development in the analysis of phonological processes. The extension of grammatical principles and parameters to phonological phenomena is well argued, and will interest theoretical phonologists and specialists of French alike.