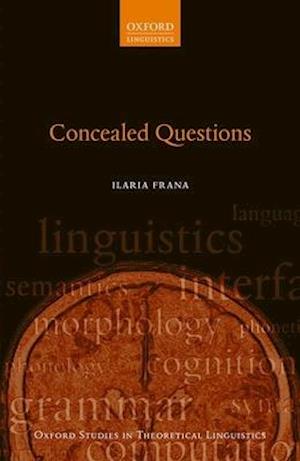 This book presents a novel analysis of concealed-question constructions, reports of a mental attitude in which part of a sentence looks like a nominal complement (e.g. Eve's phone number in Adam knows Eve's phone number), but is interpreted as an indirect question (Adam knows what Eve's phone number is). Such constructions are puzzling in that they raise the question of how their meaning derives fromtheir constituent parts. In particular, how a nominal complement (Eve's phone number), normally used to refer to an entity (e.g. Eve's actual phone number in Adam dialled Eve's phone number) ends up with a question-like meaning. In this book, Ilaria Frana adopts a theory according to which noun phrases with concealed question meanings are analysed as individual concepts. The traditional individual concept theory is modified and applied to the phenomena discussed in the recent literature and some new problematic data. The end result is a fully compositional account of a wide range of concealed-question constructions. The exploration of concealed questions offered in the book provides insights into both issues insemantic theory, such as the nature of quantification in natural languages and the use of type shifter in the grammar, and issues surrounding the syntax-semantics interface, such as the interpretation of copy traces and the effects on semantic interpretation of different syntactic analyses of relativeclauses. The book will interest scholars and graduate students in linguistics, especially those interested in semantics and the syntax-semantics interface, as well as philosophers of language working on the topic of intensionality.

Forfattere
Bibliotekernes beskrivelse This book presents a new analysis of concealed-question constructions, in which part of a sentence looks like a nominal complement but is interpreted as an indirect question. It provides a fully compositional account of a range of these constructions and offers insights into a variety of issues in semantic theory and the syntax-semantics interface.