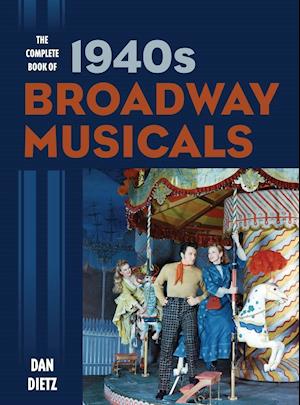 The debut of Oklahoma! in 1943 ushered in the modern era of Broadway musicals and was followed by a number of successes that have become beloved classics. Shows produced on Broadway during this decade include Annie Get Your Gun, Brigadoon, Carousel, Finian's Rainbow, Pal Joey, On the Town, and South Pacific. Among the major performers of the decade were Alfred Drake, Gene Kelly, Mary Martin, and Ethel Merman, while other talents who contributed to shows include Irving Berlin, Gower Champion, Betty Comden, Adolph Green, Agnes de Mille, Lorenz Hart, Alan Jay Lerner, Frederick Loewe, Cole Porter, Jerome Robbins, Richard Rodgers, and Oscar Hammerstein II. In The Complete Book of 1940s Broadway Musicals, Dan Dietz examines every musical and revue that opened on Broadway during the 1940s. In addition to providing details on every hit and flop, this book includes revivals and one-man and one-woman shows. Each entry contains the following information:*Opening and closing dates*Plot summary*Cast members*Number of performances*Names of all important personnel, including writers, composers, directors, choreographers, producers, and musical directors*Musical numbers and the names of performers who introduced the songs*Production data, including information about tryouts*Source material*Critical commentary *Details about London and other foreign productionsBesides separate entries for each production, the book offers numerous appendixes, such as a discography, film versions, published scripts, Gilbert and Sullivan operettas, and non-musical productions that utilized songs, dances, or background music.A treasure trove of information, The Complete Book of 1940s Broadway Musicals provides readers with a complete view of each show. This significant resource will be of use to scholars, historians, and casual fans of one of the greatest decades in musical theatre history.