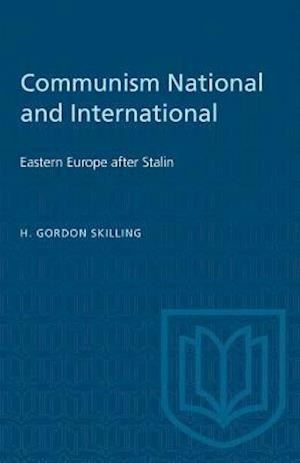 In nine studies which make up this book Professor Skilling analyses the development of the communist systems in the various countries of Eastern Europe, with special emphasis on developments following the 22nd Congress in 1961. His conclusion is that the future of communism is, to a large extent, not only out of the control of the West, but out of the control of the Communist leaders as well. For Western policy he advocates a subtle and restrained approach, avoiding both the extreme attitude of regarding communism as a monolithic enemy bloc, and that of seeking openly to divide and separate the communist states from one another. The most likely trend, he predicts, will be evolution within communism, rather than its total replacement by another system.

This work has made a distinctive contribution to studies of Russian and East European affairs. Based on scholarly research, it is written in non-technical language, and succeeds admirably in analysing a very complicated subject in relatively simple terms. It will be read with great interest and profit by students as well as by specialists, and by all the wider public interested in international affairs and in the position of communism in the world today.