Communism and Reform in East Asia 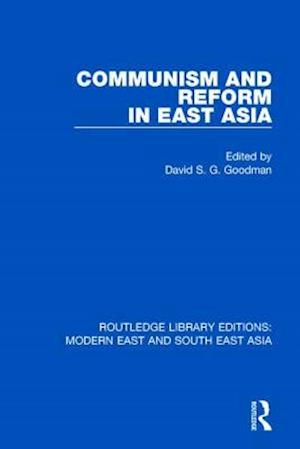 The West no longer regards communism in East Asia as a threat. On the contrary, because the communist party states of East Asia appear to be undergoing a process of reform directed primarily at economic modernization, it is now regarded as a potential market. The West's attitude is reinforced by the recognition of East Asia's economic importance more generally - a perception which in itself undoubtedly stimulated reform in the region's communist party states. The causes, extent and consequences of reform in the East Asian communist party states are the concerns of the contributions to this volume, first published in 1988. It includes chapters on the reform process in China, North Korea, Vietnam and Mongolia; as well as examinations of the roles played by both China and the Soviet Union in the Asia-Pacific region. They demonstrate that a belief in a simple, single process of economic and political liberalization - brought about by the drive for economic modernization, the production imperative - is a misleading argument. Although the production imperative might act as a stimulus to reform, it is neither a sufficient nor even a necessary condition. In individual countries the communist party's search for legitimacy, a change of leadership, or the relationship with the USSR have equally been the spur to reform. The drive for economic modernization may even be a consequence of the communist party's desire to reform rather than a cause. The absence of a uniform pattern does not detract from the potential consequences of economic and political change. These challenge socialist thinking on the nature of collective life, ownership and rural society.