- Proceedings of the 2018 Helion & Company `from Reason to Revolution' Conference 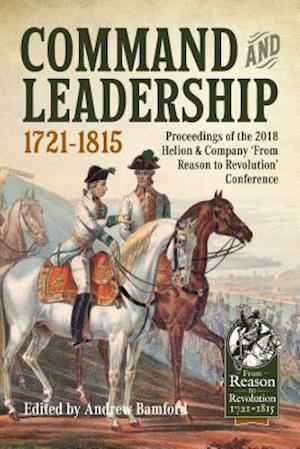 The inaugural `From Reason to Revolution Conference' took as its theme `Command and Leadership', which was explored in a variety of different ways by eight speakers whose papers took in the armies of France, Austria, Portugal, and Britain (and touched in passing on those of Prussia and the Netherlands too), and whose geographical remit encompassed North America, Europe, and Africa. This volume presents the proceedings of that conference.The first three chapters consider lower-level leadership, with a focus on ideas of expertise and professionalism. Will Raffle explores the tensions between local experts in New France and professional officers from the mother country, taking as its case study the campaign for Oswego in 1756. Tobias Roeder looks at the Habsburg officer corps during the eighteenth century and the tensions between the dictates imposed by the profession of arms on the one hand and the social expectations of a gentleman on the other. Lastly, Mark Thompson reviews a little-known body of men from the Peninsular War in the shape of the Portuguese Army's corps of engineers.The next pair of chapters address the opposing commanders in the Jacobite Rising of 1745, drawing some interesting parallels between two young royals who were both obliged to rely on their own charisma and force of character to address difficult and complex military situations. For Charles Edward Stuart, Jacobite Prince of Wales, the challenge was to create an army from scratch out of a collection of self-willed and self-opinionated individuals. Arran Johnston looks at how he did this, but also at the tensions that were inherent in the Jacobite command structure. Conversely, Prince William, Duke of Cumberland, inherited command of an army of regular troops but one which had its morale at rock bottom after defeat at Falkirk, and Jonathan Oates addresses how Cumberland was able to restore order and self-respect to his command, and take it on to victory at Culloden.The final three chapters jump forwards by a half-century, to look at the events of the French Revolutionary Wars. Carole Divall looks at the Flanders campaigns of 1793-1795, considering the problems faced by generals on both sides and concluding that all would have been far better off without the interference of their respective political masters. Jacqueline Reiter, by contrast, considers someone who was both general and politician in the shape of John Pitt, 2nd Earl of Chatham, and her study of his role in the 1799 Helder Campaign both restores a reputation as a brigadier unfairly sullied by Sir John Fortescue but also considers the tensions caused by his dual role as subordinate general on the one hand and senior cabinet minister on the other. Finally, Yves Martin looks at the three very different personalities who successively commanded the French Army of the Orient in Egypt, providing very illuminating pen-portraits of three larger-than-life characters each with pronounced strengths and weaknesses.

Forfattere
Bibliotekernes beskrivelse The inaugural `From Reason to Revolution Conference' took as its theme `Command and Leadership', which was explored in a variety of different ways by eight speakers whose papers took in the armies of France, Austria, Portugal, and Britain. 16 b/w ills, 4 maps, 1 table