- The Greatest Unauthorized Kanye West Coloring Book of All Time 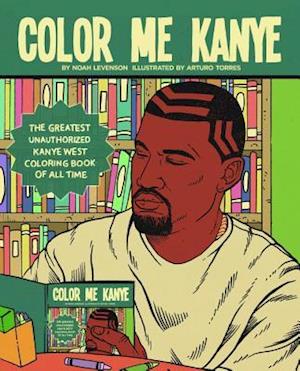 Color Me Kanye is a hilarious, fun coloring book that takes advantage of the booming market for adult coloring books.Illustrator Arturo Torres's 2015 book, The Rap Year Book, was a New York Times bestseller, a Washington Post bestseller, and a Pitchfork Book Club selection.Kanye West is a celebrity who's always in the spotlight, thanks not only to his mega-success as a rapper but also his controversial public statements and his marriage to reality TV star Kim Kardashian West.West has sold more than 32 million albums and 100 million digital downloads worldwide. West's first six studio albums all went platinum, with five of them debuting at number-one on the Billboard 200. He has won 21 Grammy Awards, out of a whopping 57 nominations. He has won 13 BMI Urban Music Awards, 11 BET Hip Hop Awards, 7 BET Awards, 4 Billboard Music Awards, 3 Source Awards, 3 MTV Video Music Awards, and numerous other awards and accolades.West has an active Twitter following: 23.7 million fans. He has 3.4 million subscribers on Spotify, with 18.8 million monthly listens. His videos have over 87 million views on YouTube.

Forfattere
Bibliotekernes beskrivelse A hilarious look into the life of Kanye West, one of the most controversial and successful rappers of all time!