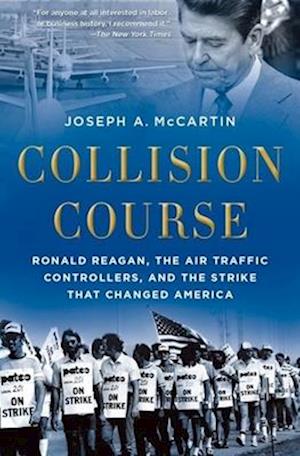 In August 1981, the Professional Air Traffic Controllers Organization (PATCO) called an illegal strike. The new president, Ronald Reagan, fired the strikers, establishing a reputation for both decisiveness and hostility to organized labor. As Joseph A. McCartin writes, the strike was the culmination of two decades of escalating conflict between controllers and the government that stemmed from the high-pressure nature of the job and the controllers' inability tonegotiate with their employer over vital issues. PATCO's fall not only ushered in a long period of labor decline; it also served as a harbinger of the campaign against public sector unions that now roils American politics.Collision Course sets the strike within a vivid panorama of the rise of the world's busiest air-traffic control system. It begins with an arresting account of the 1960 midair collision over New York that cost 134 lives and exposed the weaknesses of an overburdened system. Through the stories of controllers like Mike Rock and Jack Maher, who were galvanized into action by that disaster and went on to found PATCO, it describes the efforts of those who sought to make the airways safer andfought to win a secure place in the American middle class. It climaxes with the story of Reagan and the controllers, who surprisingly endorsed the Republican on the promise that he would address their grievances. That brief, fateful alliance triggered devastating miscalculations that changed America,forging patterns that still govern the nation's labor politics. Written with an eye for detail and a grasp of the vast consequences of the PATCO conflict for both air travel and America's working class, Collision Course is a stunning achievement.