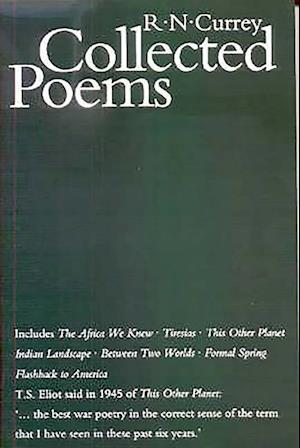 This is a collection of poems by the poet and writer R.N. Currey. Born in Mafeking in 1907, R.N. Currey was a soldier, poet and at one time a school teacher in Colchester. R.N. Currey is a poet who has pleased poets: T.S. Eliot told him in 1945 that his collection This Other Planet was 'the best war poetry I have seen in these last six years'; Dylan Thomas was so taken with the wit of 'Pelican, St James's Park' that he recited it from memory on a traffic island in front of the BBC just after he had met R.N. Currey for the first time; Roy Campbell, Guy Butler and Jack Cope claimed his work for South Africa.