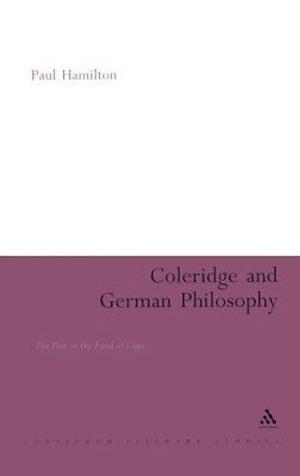 Samuel Taylor Coleridge frequently bridged the gap between British and European Romantic thought. This study sets Coleridge's mode of thinking within a German Romantic philosophical context as the place where his ideas can naturally extend themselves, stretch and find speculations of comparable ambition. It argues that Coleridge found his philosophical adventures in the dominant idiom of his times exciting and as imaginatively engaging as poetry. Paul Hamilton situates major themes in Coleridge's prose and poetic writings in relation to his passion for German philosophy. He argues that Coleridge's infectious attachment to German (post-Kantian) philosophy was due to its symmetries with the structure of his Christian belief. Coleridge is read as an excited and winning expositor of this philosophy's power to articulate an absolute grounding of reality. Its comprehensiveness, however, rendered redundant further theological description, undermining the faith it had seemed to support.Thus arose Coleridge's anxious disguising of his German plagiarisms, aspersions cast on German originality, and his claims to have already experienced their insights within his own religious sensibility or in the writings of Anglican divines and neo-Platonists. This book recovers the extent to which his ideas call to be expanded within German philosophical debate.