- An Ex-Distrito of Michoacan Mexico 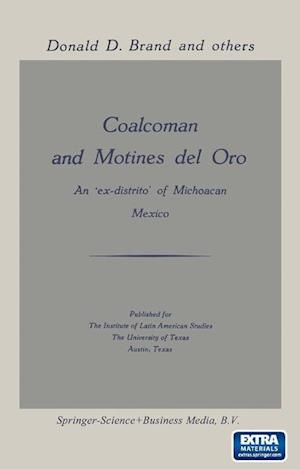 We We became became interested interested in in the Sierra Sierra de de Coalcoman Coalcoman and and the the coast coast of of Michoacan Michoacan in in the summer summer of of 1939 1939 while while in in Michoacan Michoacan with with a group group of of anthropology anthropology students students from from the University of New New Mexico. Mexico. While While inquiring inquiring in in Morelia Morelia concerning concerning archaeologic archaeologic sites sites in in the the Balsas-Tepal catepec catepec Depression, Depression, Lic. Lic. Natalio Natalio Vazquez Vazquez PalI Pallares ares (a (a native native of of Coal Coal coman, coman, and and at at the the time time the the president president of of the the University University of of Michoacan) Michoacan) told told us us that that there there were were both both archaeologic archaeologic ruins ruins and living living Indians on on the the coast of of Michoacan Michoacan near Maquili. Maquili. A A few few days days later, later, while while in in the the Nueva Nueva Italia-Apatzingan area area of of the the Tepalcatepec Tepalcatepec basin, basin, we we were were impressed impressed by by the dark dark mass mass that loomed loomed starklyon our our southwestern southwestern horizon.