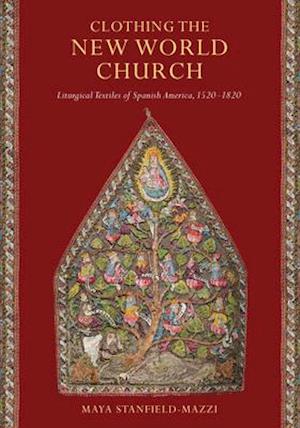 The book provides the first broad survey of church textiles of Spanish America and demonstrates that, while overlooked, textiles were a vital part of visual culture in the Catholic Church.When Catholic churches were built in the New World in the sixteenth century, they were furnished with rich textiles known in Spanish as "church clothing." These textile ornaments covered churches' altars, stairs, floors, and walls. Vestments clothed priests and church attendants, and garments clothed statues of saints. The value attached to these textiles, their constant use, and their stunning visual qualities suggest that they played a much greater role in the creation of the Latin American Church than has been previously recognized. In Clothing the New World Church, Maya Stanfield-Mazzi provides the first comprehensive survey of church adornment with textiles, addressing how these works helped establish Christianity in Spanish America and expand it over four centuries. Including more than 180 photos, this book examines both imported and indigenous textiles used in the church, compiling works that are now scattered around the world and reconstructing their original contexts. Stanfield-Mazzi delves into the hybrid or mestizo qualities of these cloths and argues that when local weavers or embroiderers in the Americas created church textiles they did so consciously, with the understanding that they were creating a new church through their work.The chapters are divided by textile type, including embroidery, featherwork, tapestry, painted cotton, and cotton lace. In the first chapter, on woven silk, we see how a "silk standard" was established on the basis of priestly preferences for this imported cloth. The second chapter explains how Spanish-style embroidery was introduced in the New World and mastered by local artisans. The following chapters show that, in select times and places, spectacular local textile types were adapted for the church, reflecting ancestral aesthetic and ideological patterns. Clothing the New World Church makes a significant contribution to the fields of textile studies, art history, Church history, and Latin American studies, and to interdisciplinary scholarship on material culture and indigenous agency in the New World.