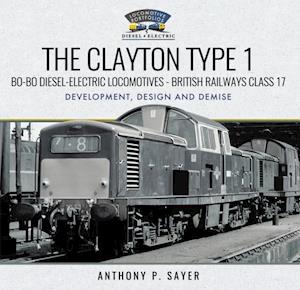 The Claytons were originally conceived as the British Railways “standard” Type 1 diesel-electric locomotive, superseding other Type 1 classes delivered as part of the ‘Pilot Scheme’ fleet. The early classes suffered from poor driver visibility, and the plan from 1962 was for subsequent trip-freight and local yard shunting locomotives to be center-cab machines with low bonnets to dramatically improve visibility.To this extent the Claytons were highly successful and popular with operating crews. However, the largely untested high-speed, flat Paxman engines proved to be highly problematical, resulting in deliveries being curtailed after 117 locomotives. Further requirements for Type 1 locomotives after 1965 were met by reverting to one of the original ‘Pilot’ designs! Deteriorating traffic levels ultimately led to the Claytons being withdrawn from BR service by December 1971.Considerable amounts of archive material have been unearthed to enable the issues surrounding the rise and fall of the ‘Standard Type 1’ locomotives to be fully explored. Further sources provide insights into the effort and money expended on the Claytons in a desperate attempt to improve their reliability. Individual locomotive record cards, together with personal sighting information, allow histories of each class member to be developed including allocations, works visits, liveries and disposal details.Supported by over 280 photographs and diagrams, dramatic new insights into this troubled class have been assembled for both historians and modelers alike.